The impact of the European green deal, a set of policies built around the aim to achieve a climate-neutral European Union in 2050, will surely be felt in the construction sector. Since buildings produce a substantial share of annual CO2 emissions, it stands to reason that their design will need to change to achieve climate neutrality. Those designs will be made by architects, which is why their thoughts and opinions on the impact of the European Green deal are excellent indicators of its development in the context of the construction sector.

In a previous article based on the Q4 2021 report of USP Marketing Consultancy’s European Architectural Barometer, we saw that a majority of architects have heard of the European green deal, but only few know exactly what it entails. Be that as it may, architects do have a clear idea of the ways the European Green deal will impact their work.

Majority of architects expect a major impact on building design 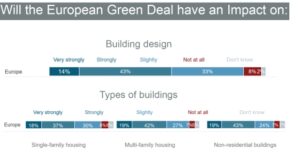 How will it impact building design though?

Aside from asking 950 European architects whether they expect an impact of the European Green Deal, we also asked them where they expect that impact in their building designs and specifications. About a third of the architects expect to focus more on technical installations in their specifications for buildings. Just under a third expect to focus more on insulation of the buildings they design. Aside from those, around a quarter of architects expect an increase in usage of recycled materials, usage of bio-based materials, and usage of certified materials.

Opportunities for manufacturers and brands of construction materials

Clearly, architects feel the way they design and specify construction materials and products will be influenced by the European Green Deal. This reveals an opportunity for manufacturers and brands of said materials and products. As architects get busier and have to change their way of designing and specifying due to the European Green Deal, manufacturers and brands can get their attention by being European-Green-Deal-proof.

For a full overview of what architects in eight European countries think about the way the European Green deal will affect their work and what they expect and desire from manufacturers, we refer you to the Q4 2021 report of USP Marketing Consultancy’s European Architectural Barometer