That is why we regularly interview contractors on what media channels they use for information gathering and orientation on construction products and brands. In a previous article, we discussed the virtual trade show, which has appeared as a digital alternative to the physical trade shows that were cancelled due to the pandemic.

What about contractors’ usage of the other media channels though? Can a trend of digitalisation or a disruptive effect of the pandemic be seen in them as well? That is what we interviewed 950 European contractors about for the Q4 2021 report of USP Marketing Consultancy’s Contractor monitor, which focuses on the media orientation of contractors from eight European countries. 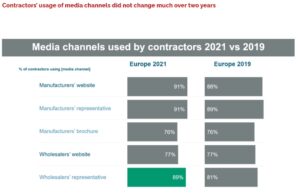 European contractors’ usage of six of the media channels included in our study did not change much in two years. The share of contractors who report to use manufacturers’ websites or representatives as sources of information is still around 90%, for instance. Likewise, the shares of contractors using manufacturers’ brochures, wholesalers’ websites, and printed or digital newsletters was more or less the same in 2021 as it was in 2019.

As for the media channels that do show change in usage, the share of contractors visiting trade fairs dropped most significantly. As we discussed in a previous article, that was due to COVID-19 restrictions. Other changes in usage are rather slim. It seems that usage of trade magazines declined a bit, while wholesalers’ representatives got slightly busier over the last two years. Meanwhile, the share of contractors using social media increased from 49% in 2019 to 57% in 2021, and the most significant increase is seen in usage of mobile apps, from 46% to 59%.

As mentioned, changes are either absent or rather slim and do not show much of a digitalisation trend in media usage at first sight. Sure, the increasing usage of mobile apps and social media can be narrated as evidence of digitalisation of media usage, but it is just as easy to link these increases to the pandemic.

When looking at contractors’ expectations for the time to come, that image changes a bit though. Usage of digital media like websites of manufacturers and wholesalers, digital newsletters and especially mobile apps and social media is more often expected by contractors to increase. Meanwhile, a decrease is more often expected for traditional media, like manufacturers’ brochures, trade journals and printed newsletters. These expectations do betray a gradual move away from traditional and towards digital media.

Although the trend of digitalisation does not appear much in the development of media usage of European contractors shown above, it is essential to realise that behaviour and attitudes of these contractors can vary a lot from country to country. To find out where the digitalisation trend is stronger or in which countries’ traditional sources seem more persevering, we refer you to the Q4 2021 report of USP Marketing Consultancy’s Contractor monitor.